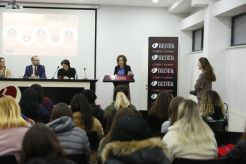 Network "Equality in Decision Making" and the Department of Communication Sciences at Bedër University College organized today the workshop on: "Freedom of the Media". The students were introduced to the "Make it Visible" initiative, represented and coordinated by Edlira Çepani.
Also broadcast the first episode of the feature series "Katrori i Pushtetit", a production of "Era Film", inspired by the reality of investigative journalism in the Albanian media. Further discussions took place with experts on media freedom in Albania, where guests were: Robert Budina, director and screenwriter of the series "Katrori i Pushtetit"; Klodiana Lala, journalist; Aulon Kalaja, activist and journalist.
During the workshop there were discussions between the guests and students of Bedër, where the latter as future journalists asked questions about the problems faced by journalism in our country.
The episode that was broadcast aroused a lot of discussion and curiosity among the students, due to the fact that this production through "Square" (Politics-Business-Crime-Media) transmitted the journalist's difficult confrontation to find the truth and the challenges of survival.