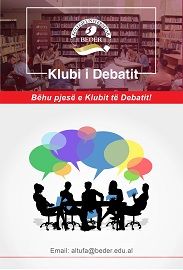 As part of the debate competition, the Debate Club at Bedër University College invites students at the Bachelor level to participate.
"Debate Club" is a student organization at Bedër University College, which operates in the form of a competition, in which several groups from different departments participate, with direct disqualification. Groups consist of three members, one of whom is considered a leader. These groups defend the subject assigned by lot, with arguments and counter arguments, to a jury of literatures and experts. The winning teams move on to other stages until the final stage. The winning group (and the second group) are given certificates and any motivational gifts.
This is a project that assists students in constructing non-representational opinions on issues facing the public, media, legal, social space, etc.
Debate Club, helps build analysis, feedback, debates etc; freely removing complexes in front of audiences, elaborating arguments, and defending ideas.
Deadline: November 8, 2019 at [email protected]